Obviously, I was feeling very worried about the surgery, I had asked for an early admission to hospital even though my surgery was not due until later in the day. (I’d rather be in the hospital worrying than at home) 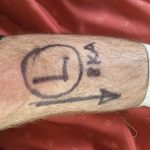 I went to hospital by taxi alone (my choice, I’d rather be at hospital alone worrying rather than having lots of others around me) and was admitted at 10:30am, now I was committed to having the surgery, I had decided if I got this far, there was no turning back.

Prior to surgery, I asked to be weighed, I was 93kg. I was curious to know how good this extreme weight loss program was!

On waking from surgery I was in significant pain. Although I was on Morphine from the operation using a PCA pump, the pain was so bad, I was also given Ketamine while in the recovery room. I remember seeing the clock in the recovery room and it said 9:30, however I was told that the op took about 2 hours.

The Ketamine helped and I fell asleep, although I had a bad night. I kept waking up, not always because of pain, I think it was just the enormity of the day. At some stage during the night I was put back onto oxygen as my SpO2 readings were low.

The operation took longer than anticipated because the blood flow to my limb was better than expected so the surgeon had to move at a much slower pace to avoid too much blood loss, this involved working with each nerve/vein/blood vessel or whatever it is individually, instead of a quick chop through the lot. This can only be a good thing to aid recovery. I was told afterwards that I only lost about 400ml of blood during the operation.