My ankle first started hurting on 8th February 2012, I have no idea what happened, I was sitting in a meeting room at work at the time and thought ‘#%?$ me, my ankle hurts’. Anyhow I continued on for that week struggling to walk on it, until I decided enough was enough, go and see a doctor.

I went to A&E was seen by a registrar, and he diagnosed it as cellulitis.

It was Friday afternoon, and he wanted to admit me to hospital there and then for IV antibiotics. I couldn’t go into hospital as my wife was away that weekend and I was looking after my 4 year old son.

I was sent away from A&E with a prescription for 2g Flucloxacillin QDS (4 times a day). I took the prescription to my regular pharmacist who almost fell off her chair, she had never seen a prescription for so much oral antibiotic. She phoned the hospital to check it wasn’t a mistake.

The drugs were dispensed and at one stage I was taking 54 tablets a day.

This was a combination of antibiotics, painkillers and my regular tablets. My stomach and bowels had been turned inside out at this stage.

I visited my podiatrist and she looked at my foot 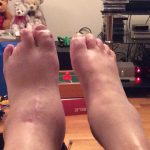 and said ‘I think that is a Charcot foot, although it is very uncommon in people who are not diabetic’.

She arranged a test for diabetes which came back negative, and wrote a letter to my GP and my regular orthopaedic surgeon with her concerns.

Things moved on quite quickly then and after several appointments, X-rays etc, I was diagnosed with a Charcot joint. The antibiotics which I had been taking for a couple of weeks were dropped, however I still had stomach and bowel problems for another three weeks, I went for three days without eating, and then went on eating natural yoghurt only, eventually my stomach settled. All this from a misdiagnosis of cellulitis and unnecessary antibiotics.

Big thanks went to my podiatrist.