Since September 2013, I had only been upstairs at home about five times. Getting fed up of living on the sofa!

I had been working at home during this time, but things were taking their toll, I was on so many tablets, the pain and the lack of sleep were getting very hard to live with.

I continued non-weight bearing for a while, the scar was healing ok, and I was told on the Monday (March 2014) that I could do a little bit of weight bearing. 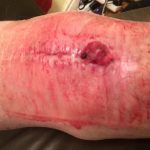 That evening at home I started weight bearing, in less than an hour my wife
was annoyed because there was blood all over the kitchen floor. I checked my foot and it didn’t look good at all. There was blood everywhere and a big lump of what I assumed to be tissue was hanging out.

At this point the same scar on my ankle had now been used 4 times, and was starting to complain about healing. 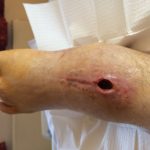 The quantity of hospital stays, operations and regular out patient visits were now seriously taking their toll.

On one of these visits, I met a vascular surgeon, who said something like ‘you would be better off without that’, he also explained that as a surgeon he has a duty to do what is right to fix and maintain things, but he also could see things from a patients point of view. This set a seed in my mind.